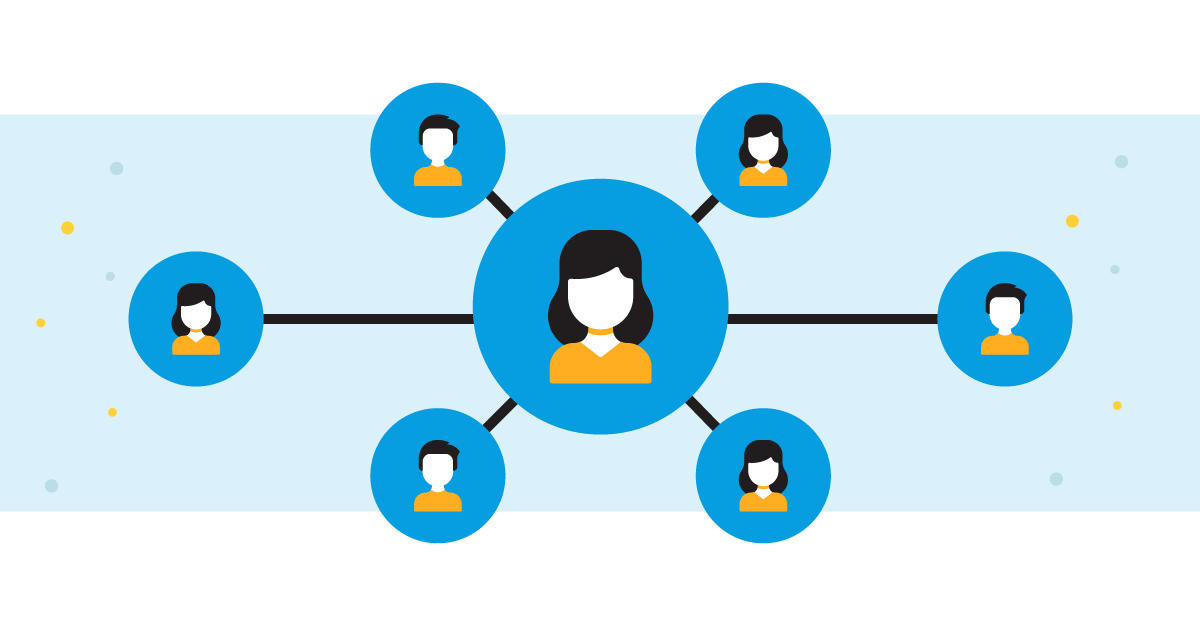 A Simple Guide to Delegation for Devs

The image of the software developer, alone in their room, pounding at the keys on a solo project, late into the night and into the early morning...is more myth than reality. These days, most devs and programmers work in teams. In fact, teamwork and its related skills might be the most important “soft” skill necessary to be an effective, professional developer, coming right after the “hard” skills of using the actual programming languages required to do the work -- at least in terms of importance.

For those of you unfamiliar with the terms “hard” and “soft”, and the concepts they imply, hard skills are those “related to specific technical knowledge and training” while soft skills are “traits such as leadership, communication or time management” (Indeed.com) And in order to be a top developer these days, like the top 3% of Latin American developer talent that Jobsity employs, one of the fundamental soft skills you need fluency in is delegation.

Often, managers and teammates alike struggle with delegation -- unsure if it’s fair, if it’s bossy, and when they do it, unsure how to delegate in ways that feel empowering and inclusive, and don’t just echo other, less healthy, power dynamics (like shirking their duties, or being a workplace tyrant).

But delegation is essential for running an efficient and effective developer team, and knowing how to delegate tasks to others, and receive tasks that are delegated to you, is a skill set that can and will make working on a software team a more pleasant and more effective experience. In this article, we’ll lay out some of what goes into delegating well so that you can become a “top 3% delegator,” just as the devs hired and employed by Jobsity are coached to be.

Everyone knows what delegation is...or do they? Delegation is commonly imagined to be “when your boss or manager tells you what to do.” And while this can be delegation, or may be the way that delegation is expressed on your team, it’s not the most generous or the most practical application of the term.

The employment site SmartBrief defines delegation as “the shifting of authority and responsibility for particular functions, tasks or decisions from one person (usually a leader or manager) to another.” And that is, in its most broad terms, what it means to delegate. Note, however, that delegation is not the same as assigning an employee work which is, in the normal course of business, his or her duties; nor does it imply giving an employee an onerous task or duty which you (the boss or manager) don’t want to do! 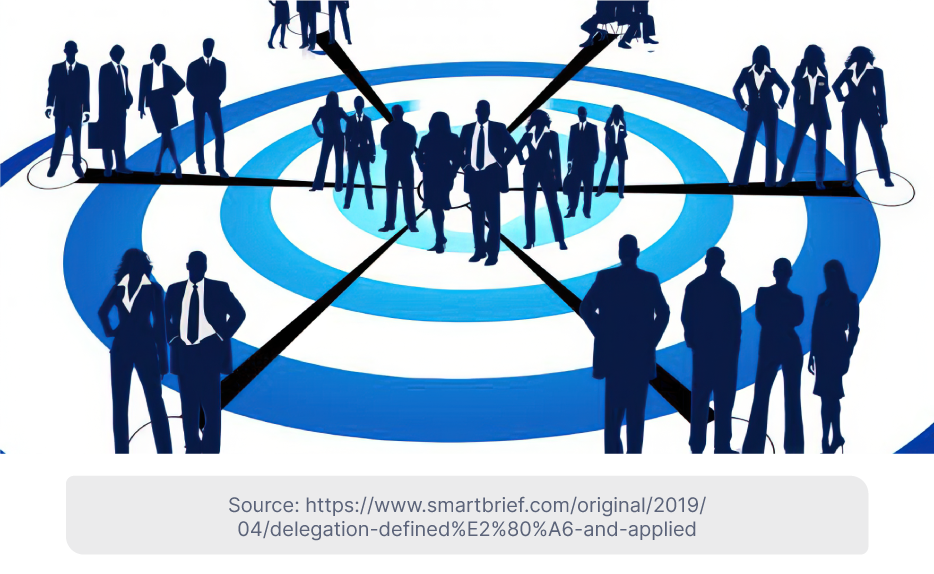 According to SmartBrief, delegation is not the following things (summarized from SmartBrief.com):

Rather, delegation is an opportunity to share work within a team in a way that allows a manager to:

As you can see, delegation is really based on three principles:


It’s not in any way about arbitrarily giving away work, assigning things at random, or shirking your duties as a teammate or manager. And without it, your team will be weaker, worse off, and less effective at getting its work done -- in the short and long term.

It may be misunderstood, but delegation, when used right, is like a managerial superpower!

How Can I Start Delegating?

For those of us who haven’t been managers long, it can often feel like delegation is asking someone else to do our work. We think: Will this make me seem lazy? Will my managers or supervisors wonder what I’m doing and question my leadership? These are understandable fears.

However, think of the opportunities you had as a junior employee to be stretched and pushed, to learn new kinds of code, to tackle new and original projects, to do things outside your comfort zone: these were all the times when you grew and developed the most -- and these were the times your manager or supervisor decided to delegate something new to you.

It’s time to pass that power on to your teammates and junior employees! 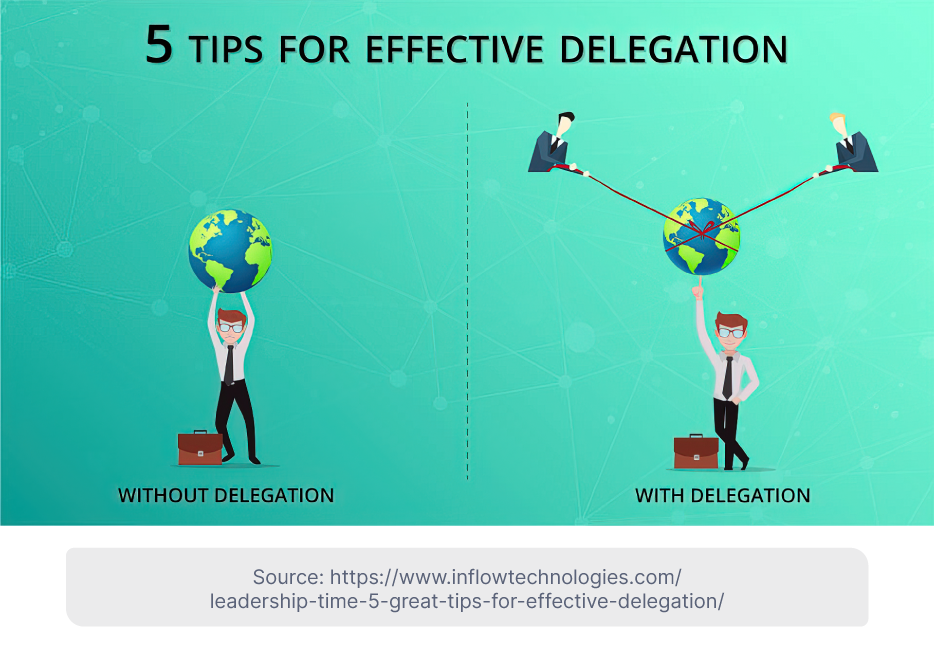 Forbes magazine quotes a number of top leaders offering solid advice for how to start delegating -- for those who are new to the skill set, are unconvinced of its value, or just need an extra hand at getting it right. Here are five of their strongest tips for how to get started on your road to being a Master of Delegation:

I suggest you start delegating by handing out small tasks. It’s not easy to pass off a key part of your big project to someone on your team, especially if you’re a new leader. Start by prioritizing everything you need to get done and delegate the bottom priorities to others. - Thomas Griffin, OptinMonster

Not everyone is going to be at the same level as the individual handing off the task. Mentorship and guidance often have to go hand-in-hand with delegation—at least initially—to ensure the people beneath the tech leader are capable of taking on what’s being handed over. - Dan Maycock, Loftus Ranches

Be a player-coach to whomever you delegate tasks to. By spending cycles upfront, the person you delegate work to will gain an understanding of the right way to complete the assigned task. Some upfront investment will be beneficial in the long haul. - Damian Ehrlicher, Protected IT

One important consideration when delegating technical tasks is understanding that “who” is always faster than “how.” Choosing the right technical person who knows how to execute the task will save you a considerable amount of time that would otherwise be spent on figuring out how to do it yourself. - Adi Ekshtain, Amaryllis Payment Solutions

There’s a balance between what you’re aiming to deliver now and who you’re planning to be in the future. The “70% rule” is a good approach for the former, but developing the instinct of envisioning what people can become with the right faith and coaching is the sustainable modus operandi. You’ll need allies to grow your vision, so take chances and teach what you know now and groom for the future. - Diana Xhumari, Tegeria

Delegation is one of the most effective ways for managers to increase the skills and productivity of their teams. Today’s delegated task recipient is tomorrow’s brand new expert. Just ask Jobsity’s recruitment team: this is one of the main reasons we hire specifically for potential -- having a teammate who can learn when delegated to is 100x more important than having a teammate who already knows how to do one thing well. Delegation facilitates learning and growth, and learning and growth are infinite culture levers that will give you as an employee, as a manager, and as a dev, an x-factor for improvement and mastery.

Interested in trying it out? Or seeing how we delegate effectively at Jobsity? Don’t hesitate to reach out. We’re standing by and always eager to talk about how we hire, develop, and delegate to the top 3% of tech talent in Latin America.

These are the Software Developer Skills You Should Be Looking For

You can have the most exciting, world-changing vision for your company with the best management team money can buy, but without skilled developers at the ready to put it together, you’re as good as st...

A Leader is Their Values in a Staff Augmentation Firm

The American Dream is an Entrepreneur’s Dream

Why The American Dream Is Still Alive—and How It’s An Entrepreneur’s Dream In order to be an entrepreneur, you need a few essential things: You need to incorporate, open a bank account, you need to be...