Understanding Design Patterns and the Benefits They Offer

A design pattern is typically defined as a reusable solution to a commonly occurring problem within a given context in software design. Now, this solution doesn’t come in the form of a ‘one-size-fits-all’ shortcut that can be introduced directly into your code. Rather it’s a blueprint or template for how to solve a problem - one that has been proven to work - that can be customized and applied in many different situations.

Why are design patterns useful for developers? First and foremost, because they save you time. There’s no need to spend a precious resource (your time) coming up with a new solution for a problem when there are tried and tested methods already available. By providing a universal ‘language’ to conceptualize recurring problems, patterns can also save time when communicating with other developers. If you say you built something using a ‘singleton pattern’ (see below), others will know what you mean. As they are already well-refined, design patterns can also help you keep your code simple and elegant, making it easier for others to understand. Moreover, even if you never actually use them, learning design patterns will teach you how to solve all sorts of problems using the principles of object-oriented design (OOD).

In 1994, Erich Gamma, John Vlissides, Ralph Johnson, and Richard Helm - the so-called “Gang of Four” - identified 23 design patterns in their seminal book: ‘Design Patterns: Elements of Reusable Object-Oriented Software’. These common patterns - a useful starting point for any developers - were grouped into three main categories, based on their purpose:

Creational patterns provide object creation mechanisms that can create objects in a controlled manner that are suitable to the situation. In this way, they help reduce complexities and instability, while also offering increased flexibility and allowing for the reuse of code. Key pattern examples include Singleton, Factory Method, Prototype, and Builder. 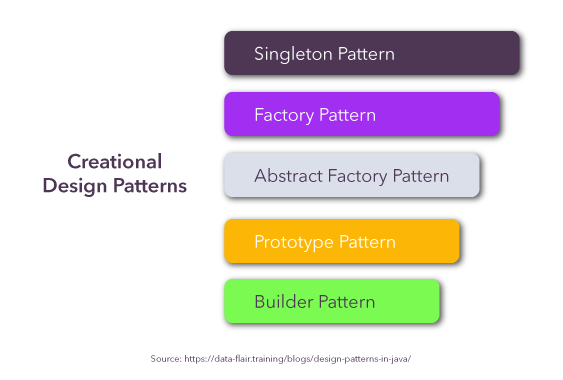 Structural patterns explain how to assemble objects and classes into larger structures while keeping these structures flexible and efficient. They provide a manner to define relationships between the components of an application and are particularly useful in larger systems. Examples include Adapter, Bridge, Decorator, and Facade. 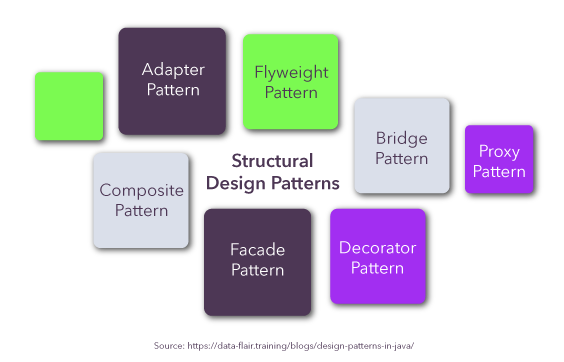 Behavioral patterns take care of effective communication between components. They are concerned with the interaction between objects, as well as the assignment of responsibilities. The goal is to make these processes as simple and understandable as possible. Examples include the Chain of Responsibility, Iterator, Mediator, Observer, and Strategy. 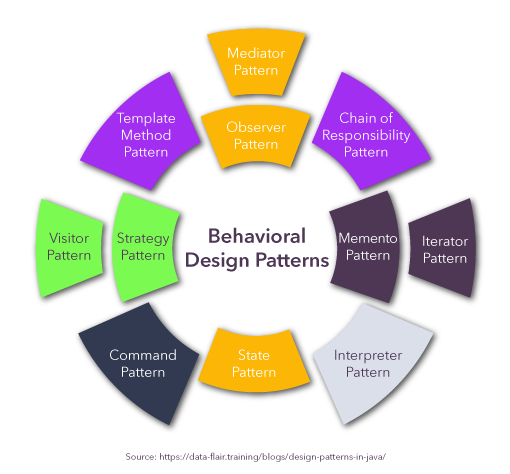 More recently, developers have been searching for new patterns that are appropriate for distributed systems, such as the increasingly popular microservices architecture. These new structures have given rise to new recurring problems and their corresponding best-practices solutions. Examples include Decomposition (by business domain or subdomains), API Gateway, Aggregato, Saga, and Sidecar.

How best to use design patterns

Knowing which patterns are available, and when to apply them in a particular situation, is key to using them effectively. Remember, these patterns don’t provide the solution themselves, but they can guide and inspire you to find the best solution for the problem you’re facing.

The lowest-level patterns are known as idioms - they typically describe how to implement specific aspects of components or the relationship between them, within the framework of just one programming language (e.g. writing an infinite loop). Another way to think of idioms is as the competent or elegant use of a programming language. If you master French vocabulary but still construct phrases in an English style, you won’t be using the language optimally. The same logic applies if you’re working with C++ and Python. Programming idiomatically is key to making code more readable and accessible to others.

At the other end of the spectrum are architectural patterns, which guide the development of an entire application. Again, the basic purpose is the same: to reuse and adapt basic design patterns - or in this case a sequence of them - that have been proven to work rather than try to reinvent the wheel every time you start a new software project. The term is sometimes used interchangeably with ‘architecture style’, and while there are overlaps, the key difference is that a pattern aims to solve a recurring problem (a style doesn’t necessarily need to solve anything). Common examples of architectural patterns include Microkernel, Microservices, Layered, and Space-Based Architecture (SBA). As we have previously written here, decisions over software architecture are typically made at the start of a project and influence everything from performance to security and scalability. Understanding which architectural patterns are best-suited to a certain business requirement - as well as how to apply and customize them for the specific situation at hand - is therefore crucial to successful software development.

While they are a vital part of any dev’s toolkit, it’s important to remember that design patterns are not a substitute for genuine problem-solving capabilities in software development. Learning the most common patterns is a must, but you still need to figure out which pattern to use and how to adapt it to tackle your specific problem. If you find yourself trying to adjust your problem to fit a particular design pattern that you’ve just learned and are eager to try out, you’re probably on the wrong track.

Here at Jobsity our developers are experienced working with different design patterns across a range of programming languages and software structures. So if you’re interested in finding out more about how patterns can benefit your organization, don’t hesitate to get in touch!

Jenna is a Colorado girl who before coming on at Jobsity, spent her career in the human services counseling field in Denver. After moving to Medellin, Colombia in 2017 to pursue her passion of exploring life in a South American country (in which she has now settled), she came across Jobsity! She liked the idea of being able to be a part of a company that bridged the two counties she loved in mutually beneficial ways. She has enjoyed getting to know the developers in the Medellin office and she has also been able to visit the Quito office and get to know many of the devs there as well. She enjoys listening and learning about the US companies (aka future clients of Jobsity) in order to understand their needs and then work with the team to meet those needs with the incredibly talented developers that make up Jobsity.

It’s that time of year again. As we move into December it’s normal to start looking ahead to what next year may bring. But this time it’s different -…

Technology
5 Hot Trends that Point to the Future…

Quality is key to a product’s success. If a software program has a bug and is unreliable, or just doesn’t perform to the standards expected of it, it isn’…

Technology
What’s New in E-Commerce and How To…

You probably haven’t heard of the book ‘Fluid Concepts and Creative Analogies: Computer Models Of The Fundamental Mechanisms Of Thought’. It’s a text…

Technology
5 Pieces of Advice on Agile…

Agile methodology came out of a need for innovation in an age of speed. As the development of new technologies speeds up, so did the product cycle…