What is Quantum Computing--and Does it Matter?

Move over regular computing, quantum computing is the new kid in town.

Or, well, not exactly. Not yet at least.

But what is quantum computing, and why are we hearing buzz from Big Tech companies like IBM and Google about potential breakthroughs and innovations which bear this sexy moniker? Today we’re gonna dig in and answer some of these questions. Namely: what is quantum computing? Is it really ready to hit the main stage and change the tech world? When it does debut, what will it do? And should we...well, care?

Keep reading to find answers to these questions and more.

Simply Put: What is Quantum Computing?

Back in the 1980s, computer scientists and physicists began to hypothesize that certain theoretical concepts from the world of quantum physics could maybe be applied to computing. At least in theory. And thus the nascent field of quantum computing was born. British physicist David Deutsch, American physicists Paul Benioff and Richard Feynman, and Soviet physicist Yuri Manin began to apply new ideas to the existing Alan Turing model of computational thinking, arguing that a computer based on quantum principles could be exponentially faster and more powerful than a binary model computer.

At this time, all computers and computing technology had been built on a binary model, using 1s and 0s. While this was efficient, easy to use, and had long held dominance in the world of tech (which it still has today), certain scientists looked to quantum physics to theorize another way computers could work. One example was the “many-worlds” theory, which suggests that there are an infinite number of universes -- which resolves the paradoxes of quantum theory, in which two seemingly contradictory things can exist at the same time (like Schrodinger's cat, in which a hypothetical cat can be thought to be dead and alive at the same time). 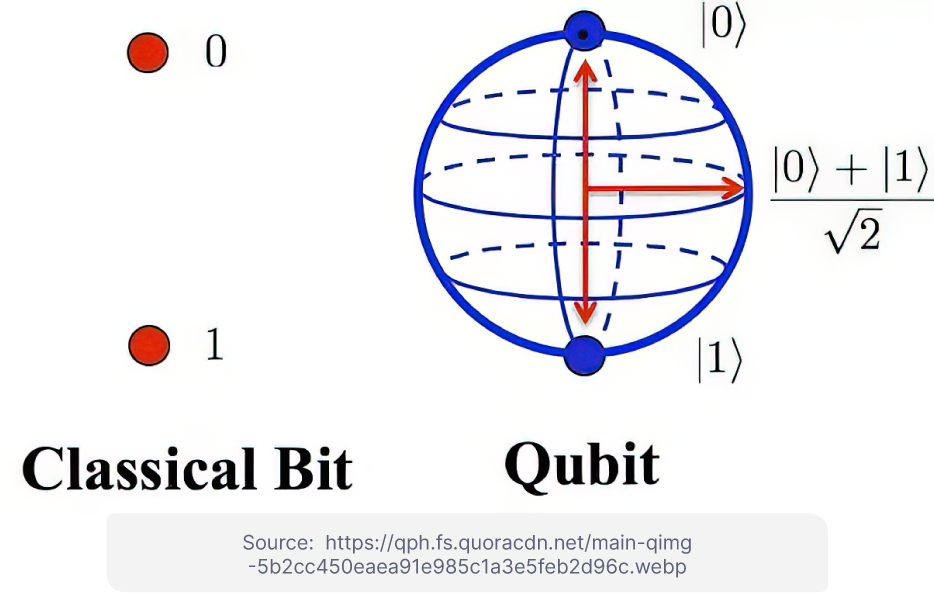 As such, rather than 1s and 0s, quantum computers could use another form of data which could exist...as both 1s and 0s at the same time. These units, called ‘qubits’, mean that quantum computing can be exceptionally fast -- much faster than the “sluggish” non-quantum methods of computers we’re all accustomed to these days. If only scientists could figure out how to create and maintain qubits and make them scalable and producible in a commercial way.

Where Can I Get a Quantum Computer?

In short, you can’t. While physicists and computer scientists have been working on quantum computing for over 50 years, the science of these machines is still in its infancy. To borrow a phrase from BuiltIn, today, quantum computing is “Far from commercially scalable but more than mere fantasy.”

The first acting model of a quantum computer was developed in 1993, and by the end of the last decade, there were around 100 models in existence. Whether or not we see them take prominence in the next decade remains to be seen, but today, thousands of people -- and dozens of “Big Tech” firms -- are involved in trying to develop quantum computers.

Several types of quantum computers are currently being developed, with the main players in the game being IBM and Google. The Science Museum Blog has written a helpful summary of two models for how technologists are creating quantum computing power:

This quantum computer “relies on a loop of superconductors – materials that have zero resistance to the flow of electricity at low temperatures” and uses a ‘Josephson junction’ to allow a current to flow clockwise and anticlockwise simultaneously, “a superposition of states” which creates a qubit.

This other kind of quantum computer creates qubits “when the spin of a single atom of phosphorus inside a silicon chip can be put into a superposition, manipulated and then read by applying a microwave pulse. These are the types of computers currently in development by companies like IBM. 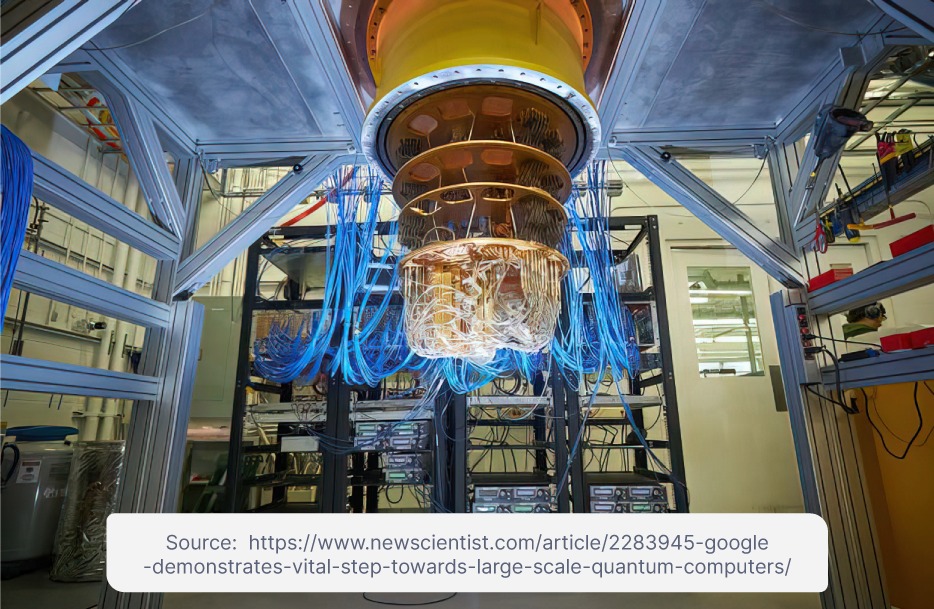 What’s Next for Quantum Computing?

In October 2019, Google announced that it had reached “quantum supremacy” -- which means manufacturing a quantum computing event which supersedes what’s possible in traditional computing. While IBM took issue with this claim (insisting its conventional supercomputer can do exactly what this quantum computer did, if not more), the Google team insists that their computer “performed the target computation in 200 seconds, and from measurements in our experiment, we determined that it would take the world’s fastest supercomputer 10,000 years to produce a similar output.” 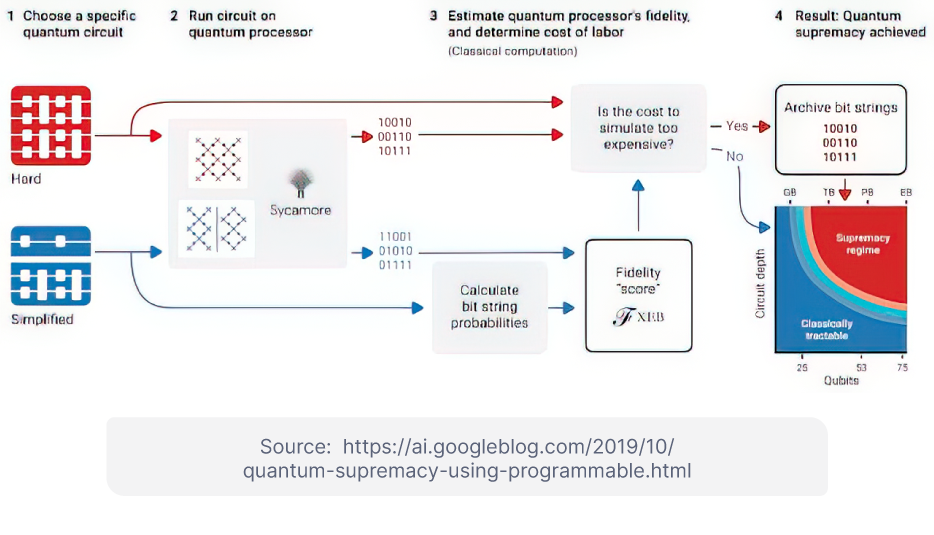 Certainly such speed would mean a great deal for a world which depends more and more on computation to run, well, everything. But does it really change the game? Yes and no.

As journalist Gideon Lichfield put it in the MIT Technology Review, “Pichai, Google’s CEO, compares [the innovation to the] 12-second first flight by the Wright brothers.” Not necessarily a groundbreaking feat in and of itself, but a groundbreaking milestone, and an essential one in the process of reaching the full potential of what quantum computing could mean for the world in the coming decades.

Google’s current computer harnesses the power of 53 qubits, and it’s the first time a physical computer (not an emulator) completed a computing task that supersedes that of a conventional computer. But as of now, this technology has no practical application; it can’t be used for cybersecurity, or to scan your Facebook likes to better understand if that cute girl in IT has a crush on you or not.

What it does mean, is that we now have a direction to take quantum computing research: a physical tool with which to test the bounds of this new technology and an experimental track upon which to run. Where this takes us, and what it will mean for technology in the future, remains to be seen.

If this article has piqued your interest in an exploration of quantum computing, we invite you to explore the articles linked above to learn more, or to take part in a discussion in the comments or on our social media channels. Likewise, Jobsity’s team of top LATAM developers is standing by to talk about your current software development needs, even if they aren’t yet quantum in nature. Just reach out and ask; we love to connect and would be honored to help!

It’s no secret that software developers and engineers are in great demand these days. According to the US Bureau of Labor Statistics, the number of…