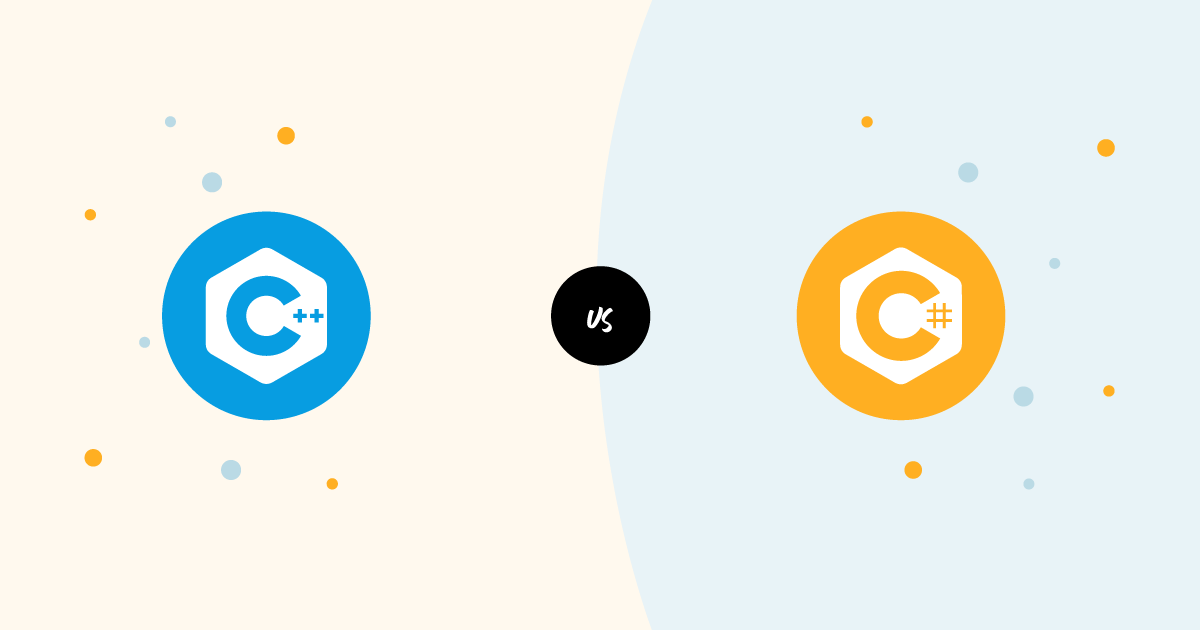 C++ v C# - Key Differences and When to Use Them

Learning a programming language is no small task, so it’s only right to spend some time considering which one will work best for you. One common comparison is between C++ and C#. With roots in the general purpose C programming language, both share some similarities, especially in the syntax. However, they are fundamentally different languages with their own strengths and weaknesses.

Here we’ll take a closer look at these two languages, including the main differences between them and when they should be used.

An introduction to C++ and C#

What is C++? The C++ language was developed by Danish computer scientist  Bjarne Stroustrup in the 1980s. His goal was to create a language that supported object-oriented programming based on C. C++ was designed to be less complex and more reusable, making development more efficient. The language has been upgraded and improved several times since its origins, with the latest iteration (C++20) published in December 2020. It has been mainly used for game programming, software engineering, data structures, developing browsers, operating systems, and applications.

What is C#? C# (known as ‘C-sharp’) is a younger variation, developed in 2002 by Microsoft as a fully object-oriented programming language for the .NET platform. It quickly became popular on the Windows operating system and was later adapted to run on other platforms. Over the last two decades, C# has evolved with additional features to support new workloads and emerging software design practices. It’s one of the most widely used languages today for the construction of web-based applications, desktop apps, games, and interactive software.

Key differences between C++ and C#

As we mentioned earlier, there are some similarities between C++ and C#. Both languages are object-oriented meaning you can write code that is modular, flexible, and reusable. They are both based on C, so the code looks broadly similar at first glance - both use the concepts of classes, inheritance and polymorphism. Moreover, both C++ and C# are compiled languages, meaning the code must be converted before they can be executed on a computer (an .EXE file is a typical example of a compiled file that could be written in C++ or C#).

However, despite some surface-level similarities there are key differences in the two languages. Here are some of the most important distinctions:

Should you use C# or C++ for your project?

As ever, the short answer to this type of question is: “it depends”. According to the latest Stack Overflow developer survey, C is the more popular language with 29.8% using it vs 19.9% for C++. However, as we’ve seen, there are key differences to the two languages, so rather than just picking a favorite it’s useful to consider which would be most suitable for each project.

If your organization needs nearshore developers with knowledge of C++ and/or C#Jobsity is home to the top 3% of LATAM dev talent and can quickly add capacity to your team. We love to connect so just get in touch and let’s see how we can help!

Mauricio has been at the forefront of technology for +15 years. He is constantly integrating new technologies including frameworks, CMS, and standard industry models. He is a pragmatic problem-solver and customizes solutions based on the best schema/language/application for each project. As the CTO at Jobsity, he ensures that his team is always up to date with the latest advances in software development by researching the software ecosystem, implementing professional development initiatives, and coordinating with new and existing clients about their needs.