Assessing the Pros and Cons of In-House vs. Outsourced Developers

Assessing The Pros and Cons of In-House vs. Outsourced Developers

The first advantage of outsourcing is time-to-market optimization.

When compared to the normal staffing process, outsourced developers provide the right mix of talented individuals much faster than when compared to the traditional hiring process. Professional outsourcing and staff augmentation firms know how to launch projects in an efficient manner, meaning no time is wasted on unnecessary overhead.

Another crucial extra: a big enough vendor is often able to provide a complete team (developers, testers, product owners, scrum masters, UX support) in as little as one week, so you can get the desired pace of work right away. (Any fans of HBO’s Silicon Valley will understand the cutthroat nature and challenges of hiring a whole coding team at once.)

Software development is a crucial part of business. Every company is a tech company these days. This means that the expertise is something that builds over time as the number of realized projects accumulates. Staff scramble to learn as they go, often with too little time or expertise to start up large new initiatives.

Specialized teams of outsourced developers that have deep expertise, on-going training with exposure to the latest development platforms, and ready availability, provide a one-stop solution. (When you can work with a trusted vendor).

We handpick talented developers and put them to work for you. What skills is your organization seeking? Chat with the Jobsity team.

The third strength of software houses is their scalability.

Which means that professional vendors not only can easily scale up the teams while the project is developing but they can also flexibly scale down the teams and shuffle developers among other projects without risking the consequences and costs of dismissing employees.

The same goes for projects with high growth potential. If in time the need for a larger team arises, your partner is expected to provide you additional resources as needed without your having to do any future recruitment yourself.

The most frequently cited disadvantages of outsourcing are

Every region of every country has different specializations, and of course many geographic areas don’t have a large enough pool of qualified developers. Specialized vendors offer easy access to talented individuals ad hoc. Every good software house always makes sure that they have some available developers on the bench who can jump on a new project right away, even if work is planned to start the next day. They have easy access to talent coupled with experience in acquiring new talented developers locally.

Cost can be another downside, unless you go offshore.

If they are North America-based vendors, you can expect to pay at least a 20% premium over the cost of a team from a foreign country with lower wage scales.

However, these are manageable risks which can be limited using a set of smart criteria.

Next, how do you minimize the risks of outsourcing and still get outstanding work from outsourced developers?

Staff Augmentation is becoming the preferred model for outsourcing today.

As compared to the older Professional Services model, staff augmentation gives you direct control over your own long-term dedicated team, without the need for internal management or admin overhead. All hiring, continuing education, payroll and benefits are done for you by the vendor.

Nearshoring is increasingly the favored solution to language, cultural and distance barriers.

“Nearshoring” is defined as moving IT or business processes to a third party located in a nearby country within a similar time zone. A good rule of thumb is to stay within 5 hours of flight distance and avoid crossing the ocean.

Besides the time and distance advantages, there are cultural advantages as well. English is spoken widely by educated workers in South America, and the “New World” cultural affinities between North and South America bind the people through similar styles of work and play, business ethics, and shared norms of straightforward communication.

We’ve done the research and found some surprisingly vibrant areas with high IT skills and plentiful talent availability  in South America, especially the northernmost countries of Colombia, Ecuador, and Venezuela, which can be reached within a few hours from several cities in the southern US like Houston, Atlanta and Miami.

3. What do the numbers say about business approaches to hiring in-house vs. outsourced developers?

In a 2017 report called “The App Dilemma,” the American app design firm Kony sponsored a Wakefield Research survey on business approaches to app development. The survey targeted 1,000 global line-of-business executives at companies with 1,000+ employees across industries including banking/finance, healthcare, energy, utilities, and marketing/sales. The majority of respondents were in the U.S., though 17 other countries were also included.

“Many businesses note the challenges that exist in their organization that are holding them back, including issues with IT," the report stated. In fact, 97 percent of those who don't utilize their internal IT department for mobile app development say it's due to lack of skilled staff (42 percent), limited IT budget (40 percent), and security vulnerabilities (37 percent), among other reasons.

87 percent of business executives who didn't invest in mobile apps in the past 12 months don't feel their company has the time or resources to develop its own mobile apps. Over half (65 percent) of those who managed app development in-house were not completely satisfied with the overall user experience or with how apps have been managed by internal IT departments."

Other data points of the report include:

The coming decade could see 35 million mobile applications, 4 billion people online, 31 billion connected devices, 1.2 trillion sensors, all delivering 40 trillion gigabytes of data. At the heart of it all is mobile, which is fundamentally changing how business gets conducted. Further, the consumerization of the enterprise brings increasing employee demand for applications and information in near real time – similar to their personal experiences.

Here are a few charts from Kony’s survey, providing a big picture of the current state of (mostly) US businesses and their attitudes and approaches to app development. 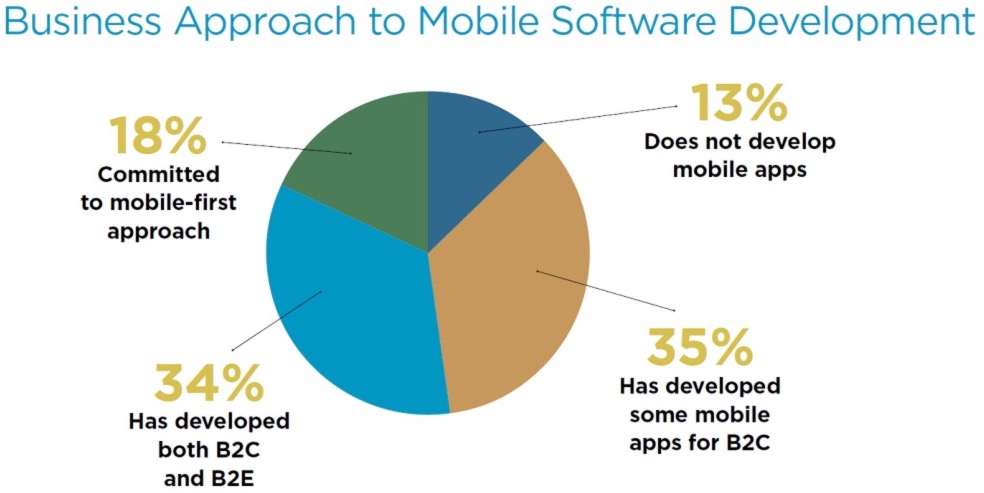 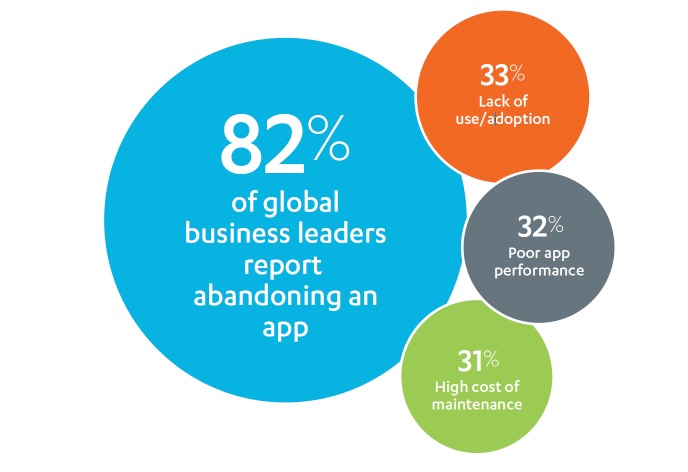 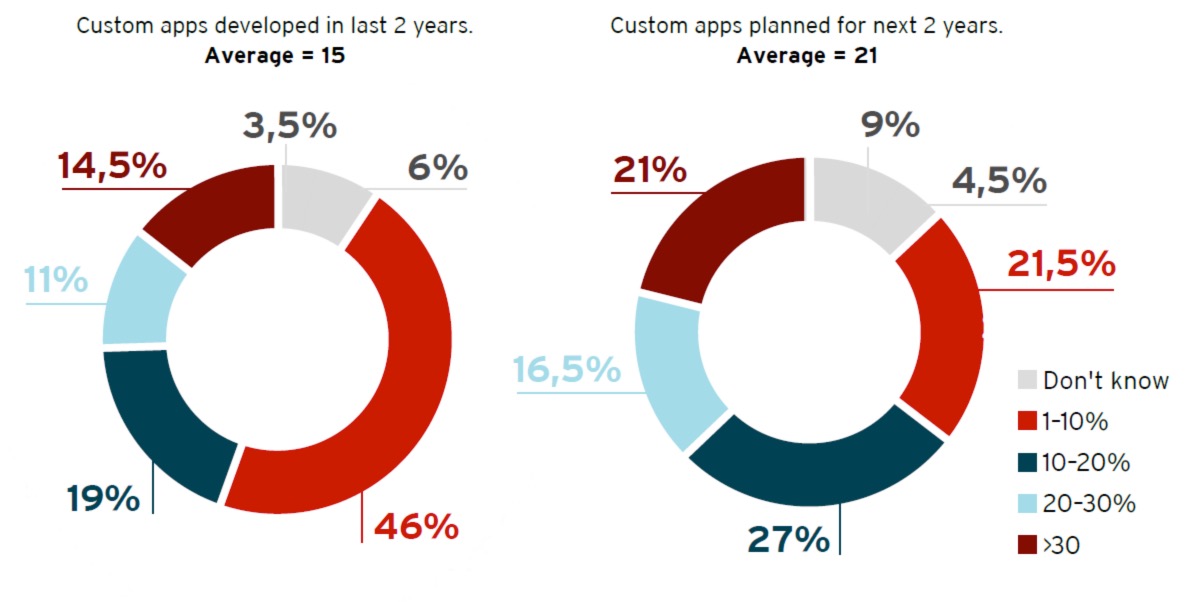 If you feel like you’re behind the eight ball on building out a team to meet your company’s mandated directions, you’re not alone. Given the current environment of rapidly growing demand for new apps and the scarcity of locally based IT professionals who can meet those demands, the scramble for talent will only intensify in coming years.

This is why partnering now with a reliable vendor who can provide you with a consistent, dedicated team throughout the life of every old or new project into the future is a wise move.

Jobsity is a nearshore staff augmentation firm with offices in Quito, Medellin and Cartagena as well as a small staff in New York City. We were recently honored with induction into the 2017 class of Endeavor Companies, promoting innovative entrepreneurship across the globe, as its first software development vendor in Ecuador to be recognized.

One major concern for US companies - especially smaller entities and startups - is how to attract local tech talent without paying astronomical rates. A…

Jobsity Customer Service: The Road to…

Our CEO, Andres Garzon, has taken over the podcast! In this new episode, he talks about what Jobsity is doing to become a fully customer-centric company.…

Ask any tech entrepreneur where they would set up their new business venture, and you’d expect one answer to come up most of the time: Silicon Valley. San…